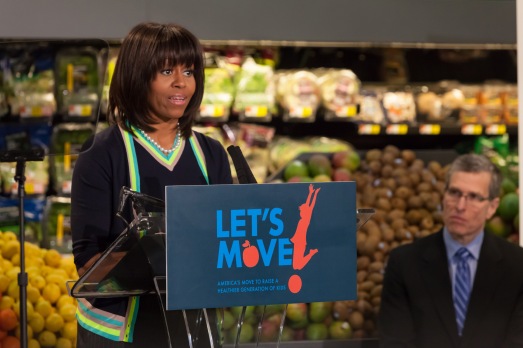 As you celebrate the 3rd anniversary of your signature childhood obesity program, Let’s Move, I have to ask this question:  What the heck happened?

You started out so boldly, with a focus on nutrition policy. That focus and your support led to the passage of the “Healthy, Hunger-Free Kids Act” in 2010, which is improving the food and drink children are served at schools across the nation. That accomplishment, Mrs. Obama, is real, sustainable change that will positively impact the health of millions of children for years to come. Thank you!

But since then, you have backed away from supporting policy, as if it were the plague. Currently, Let’s Move’s focus is on increasing physical activity and brokering voluntary agreements with the food and restaurant industries. Nothing is wrong with either of these initiatives except that if you want to tackle childhood obesity, neither will make much of a dent. Physical activity is definitely important for the overall health, fitness and well-being of our children. But when it comes to the cause of obesity, studies have shown that a lack of physical activity is not the culprit. Public health advocates believe that a significant increase in calories is the real cause of our epidemic, and certainly the one you should be focusing on if you hope to reverse childhood obesity.

Speaking of calories, you brokered a voluntary agreement with the Darden Restaurant chain in which they promised to reduce calories, across the board, at all of their restaurants, over a 10 year time span. Wonderful. I hope they keep their promise. And you’ve gotten Walmart to voluntarily agree to bring healthier fare, including produce, into its stores to help save consumers money (a promise which, this week, has been revealed to be less than successful — with Obama Foodorama’s Eddie Gehman Kohan reporting, Walmart likely only “saved” each customer a breathtaking $8.57 in 2012.) But once you leave the White House, Mrs. Obama, will any of your voluntary agreements be sustainable? Who will hold Darden’s feet to the fire when the President’s term ends?  Who will ensure that Walmart is truly promoting healthier foods, like they claim to be, but others have been unable to verify? Voluntary agreements have merit, but let’s be realistic. They will be extremely difficult to sustain once you’ve left the White House and they should never be a substitute for policy or regulation. I’m sure you are also aware that voluntary agreements are a favorite tactic used by the food industry to put off policy and regulation that would create permanent, healthy change.

Public health experts agree that policy and regulation are the real key to improving our nation’s food system and ending the scourge of childhood obesity and related chronic disease like type 2 diabetes. What kind of policies would make a difference? How about giving farm subsidies to farmers growing produce, rather than reward those who grow crops that are used to make junk food? How about limiting the marketing of unhealthy food to our children, increasing the price of cheap, non-nutritious sugary drinks, or providing front-of-package nutrition labels that are easy for consumers to understand? And how about policies that would reward the food industry for producing healthier fare, perhaps through tax credits.

These are the types of creative, sustainable steps that will lead to a food environment more hospitable to health. But we’ve seen no recent sign that you will stand up and support strong nutrition policy or regulation. Rather, we’re hearing that the White House (and I assume that you’ve been consulted) is actually holding up the final rule making and implementation of the federal menu labeling law, in order to significantly weaken it, thanks to industry’s relentless lobbying. What policy could be more benign and helpful than one that gives consumers, at chain food service establishments, calorie information at point of purchase so they can make healthier decisions for themselves and their families?

While it didn’t surprise me that you chose to focus on physical activity and voluntary initiatives, as we approached the President’s 2012 re-election campaign, it does surprise me that you’re still steering clear of support for policy change now that your husband has been re-elected. Don’t you want to leave a legacy of sustainable policies that will continue to improve our children’s health (and increase their lifespans) long after you have left the White House?

Mrs. Obama, it’s clear you care deeply about America’s children and the epidemic of overweight and obesity that plagues this nation. Your leadership on the childhood obesity issue has raised awareness to new heights. But if you continue to avoid supporting policy change, I believe that history will remember Let’s Move as another “feel good” First Lady program that’s long on public relations and short on substance. Please use the power you have now to leave a sustainable legacy, in the form of policy and regulation, that will ensure we have a healthier food supply and food environment in the decades to come.