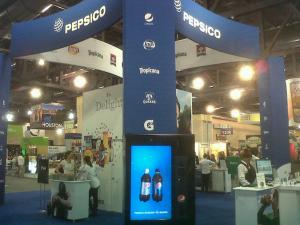 If you want to see firsthand how Big Food has co-opted America’s nutrition professionals check out the Academy of Nutrition and Dietetics (formerly the American Dietetic Association) Food & Nutrition Conference and Expo (FNCE). The 2012 FNCE just held in Philadelphia October 6-9, had a startling number of Big Food partners and exhibitors on the premises including Kraft Foods, Frito Lay, McDonald’s, Monsanto, PepsiCo, Hershey’s, Unilever, Yum Brands, the American Beverage Association, Cargill and Coca-Cola.

At FNCE, dietitians who counsel America’s kids and adults on proper eating habits were informed at “educational” conference sessions that:**

FNCE attendees also had the opportunity to:

To be fair, there were plenty of good exhibits from healthy food providers that sell whole foods like nuts and produce, as well as booths for Meatless Monday and Food Day 2012. And while numerous representatives from Big Food and Big Food front groups were presenters at the sessions, there were presenters who weren’t beholden to the industrial food industry and were able to speak the truth about what makes up a healthy diet.

The Academy of Nutrition and Dietetics (AND) is long overdue for a massive member uprising — one that will end the stranglehold Big Food has on AND’s leadership.  AND is curiously out of step with other public health groups when it comes to supporting evidence-based policies and practices that would improve America’s food system and the health of our citizens.  Not surprisingly, AND’s positions tend to hew to the viewpoints of the Big Food corporations that pour money into the Academy for the privilege of being a “supporter.” When will AND’s rank and file put an end to this embarrassment?

**Many thanks to registered dietitian Andy Bellatti who live tweeted from numerous FNCE events and exposed the misleading comments made by Big Food presenters — @andybellatti.